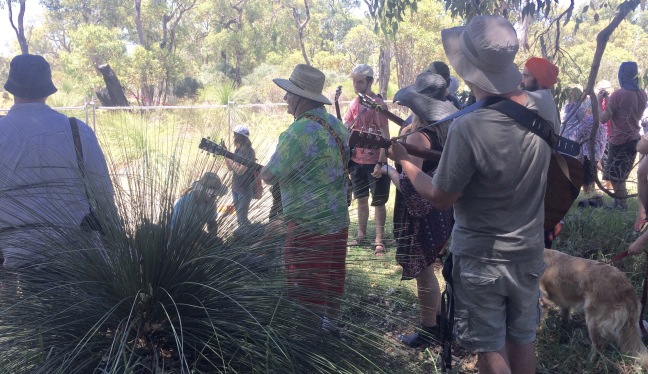 Protest songs are responses to intensified political environments. In the early sixties civil rights singer-activist Bernice Johnson Reagon (later founder of Sweet Honey in the Rock) saw how freedom songs brought together black communities, noting the ‘power of song as an instrument for the articulation of our community concerns’ (28). Some suggest there is a return of ‘movement music’ in the Black Lives Matter campaign, as musicians revive and redefine the tradition of protest song (Tillet 2015). Its reach in Australia is evident in The Cat Empire’s 2016 release of the song ‘Ms Dhu’ in response to the release of footage of the death in custody of 22yo Yamatji woman Ms Dhu in Port Hedland, Western Australia in 2014.

Protest songs still have a powerful function in everyday protest situations like the Roe8 campaign. There have been musicians present since the beginning of December, on the day police turned up to clear the path for machinery to enter the newly fenced woodlands on Malvolio Road in Coolbellup. On this day, as the small crowd looked for shade and direction, the familiar chords of ‘Get up / stand up / stand up for your rights’ suddenly gave everyone expression and focus. The spontaneity of protest actions like this meant there was no leadership or plan; people just turned up in shock as they realised that work was about to begin on this project. The crowd was mostly at a loss about what to actually do: should we obey or resist police requests to clear off, risk a move-on notice or arrest, sit and witness or get onto social media and phone politicians? When Ewan started strumming ‘And we say no no no / to Roe Roe Roe’ people joined in the steadying rhythm that gave some regular metre to the volatility of emotions that morning. Since that first morning musicians have been part of every protest action, and played a crucial role in expression and focus.

As well as the regulars, some famous locals have joined in the protest, like on the day Donna Simpson from The Waifs sat in the dust and played while the bulldozers were on their way, and the day John Butler crooned the crowds at a large and particularly heartfelt protest on site. Simpson’s rendition of Woody Guthrie’s ‘This land is your land / this land is my land / from the heart of Cooby / to the Beeliar wetlands / to White Gum Valley / to our Fre-oooo / This land was made for you and me’ pays tribute to that long history of protesting in song and adapting the template for local use.

Spontaneous recycling of familiar tunes in the service of expression, political statement and serious fun has been a regular source of amusement and community building. Who can forget the earworm of ‘In the wetlands / the mighty wetlands / they want to build a road / … and we say Nooo’, a spontaneously adaptation amid the Fremantle Festival parade a couple of years ago? Or the more readily rhymed ‘No no no to Roe / No to row to Roe’.

Music has the capacity to both incite anger and calm at protests. On the day that Ewen was arrested he was singing through his megaphone ‘Sit down / sit down / sit down for your rights’ in an effort to de-escalate the potential violence of a large moving swarm of people amidst agitated and mounted police. At the Premier’s office on Stirling Highway protestors switched between singing the idyllic ‘Somewhere / over the wetland’ and an adaptation of Pink Floyd’s menacing ‘Another Brick in the Wall’ (We don’t need your filthy highway … Hey Colin / leave our lakes alone). At the same time, a connected line of people would flip placards displaying idyllic banksia woodlands and wetlands on one side, and on the other side a long congested road of trucks, paralleling the tone of the songs. The most memorable and emotionally wrenching form of vocalising was perhaps the keening by women the day the bulldozers approached the sacred women’s site in the most ecologically vulnerable part of the wetland, with guttural drones and harmonies rippling over the crowd repeating simply, Protect the Beeliar.

Musicians have organised concerts every couple of weeks, as a way of drawing attention to the campaign, attracting new demographics, and providing respite and music for campaigners to socialise and enjoy. The range of music demonstrates the broad span of protest genre: folk and country, hiphop and electronica, Afro-kriol, roots, blues, indie, as well as the outer-space concept band ParmeZan have frequented stages and roadside rallies. As well as established groups and musicians, regular citizens also bring their own music to events. Amid rising emotions and the friction of protest, comfort can be found next to the girl with the copper singing bowl, and the chanting man with the bodhran.

Songs are also a way to get used to different languages in your mouth. A women’s event to pay respect to the Indigenous women’s birthing site in the wetlands was given focus through a chant composed for the occasion by Della Rae Morrison in Noongar language; ‘Dabakarn’ was distributed to all the women attending and was sung in a circle after silently walking to the sacred site. The utilisation of Noongar words, like for country/boodjah and strength/moorditj, have become increasingly common at the protests, contributing to the enlivening and spread of Indigenous language and its living culture, while also accentuating the ancient connections of this land with Indigenous custodians.

Making music has also been a vital form of meaningful expression, creative contribution and even cathartic protest. An album of original Beeliar-themed songs is presently being recorded and digitally mastered on the platform Bandcamp, and another bonus album of covers and parodies is being organised, with sales of both going toward the campaign. Periodically someone posts a song they’ve written and recorded. This morning there was one from local musician Rachel Armstrong, called ‘Trapper Watcher’. It documents the activities of the watchers, a network of people involved in reporting the early morning movements and compliance of animal trappers prior to land clearing for the highway.

By the end of the song the emotional toll of watching the clearing of bushland is gut-felt: ‘I no longer watch / can stomach no more loss’. The affects of protecting urban bushland are particularly intense for those living amidst it, and it’s important to find ways of acknowledging that trauma.

Songs are not only significant forms of expression at the moment of protest, but also enduring legacies as they are remembered, rewritten, reused. Anna Reading talks about the songs she sang 30 years ago at the Greenham Common women’s peace camp, which form her ‘personal memories of nonviolent political struggle’ and are embodied, as a kind of living archive of that event. We often take music for granted; in the Roe8 campaign it’s been a source of spirit and sustenance, energy and equilibrium, personal and political expression, as well as a vital part of the cultural production of this democratic process, a creative community building component that stays with us. Song opens our mouths and our hearts. Music gets into our ears and under our skin. We become involved, feel emotions, build resolve. We remember.

Tillet, Salamishah. The return of the protest song. The Atlantic 20 Jan 2015.